Firstly, I must admit that a very high current transformer isn't something that most people will ever need.  I've managed without a dedicated 'system' for many years, but I've often had to 'jury-rig' something so I can run tests, often using a few extra turns on a toroidal transformer, or resorting to a (very old) soldering iron transformer that is designed to deliver 3V at 30A.  It wasn't a major problem until I had to run some tests on relay contacts, so see how much current they would support before the contacts literally welded themselves together.

Having messed around with sub-optimal interim solutions, I decided to repurpose a 200VA transformer I had to hand and build a dedicated high-current test unit.  To be useful, it must have an open-circuit voltage of no less than 3V (at rated input voltage), and be able to supply at least 50A RMS into a near short circuit.  By using an existing transformer, I didn't need to bother with winding a new primary, but I did have to completely remove the secondary.

The transformer I used is an E-I type, so winding even a modest secondary was a bit tedious, but it doesn't need many turns to achieve the results I needed.  It's now complete, and I decided that it was worthy of a project in its own right.  Electronics enthusiasts often need very obscure test equipment, and this qualifies in every respect.  It's obviously important that it's safe to use, even if it is a test fixture.  It can be all-too-easy to 'forget' that there are live mains floating around (as it were), and in the interests of not taking up any more space than absolutely necessary, it should have an IEC mains input - I hate stuff with attached mains leads, as they invariably get in the way when storing the equipment when not in use.

To build this project, you need a sacrificial transformer - one that works, but is superfluous to requirements.  An ideal candidate would be one that has an output voltage that isn't useful for any amplifier that you may consider building, or that is otherwise deemed useless.  I don't recommend anything less than 200VA, as it won't be able to provide the high output current needed.  You can use an E-I laminated or a toroidal transformer, with the latter providing better performance.  With a nominal output voltage of 4V, this will allow up to 50A while still within the transformer's ratings.  For short durations, it should be possible to get somewhere between 75 and 100A, more than enough to test almost anything!

One thing that is essential for this project is a Variac™ or similar variable autotransformer.  This is (IMO) an absolutely essential piece of kit in any well-equipped workshop, and they are described in great detail in the article Transformers - The Variac.  This is the only practical way to control the output current, and it gives you almost infinite control over the full permissible current range.

As to the project itself, there really isn't a great deal to describe.  Anyone who decides that this is a good idea will have a different transformer and will need to make appropriate adjustments to adapt it for use.  Because i didn't have a suitable gauge of enamelled wire, I used ten turns of mains rated earth wire with a PVC insulating jacket.  While a great deal thicker than enamel, it fits inside the winding window almost perfectly, and allowed enough turns to get 4V RMS open-circuit.  Because it's a fairly heavy gauge (2.5mm², 7 × 0.67mm copper wire), it can handle 50A with ease.  It does get warm, but tests at that sort of current are almost always fairly brief, so it's not an issue.  The official rating for the cable used in this way is 23A [ 1 ], with a maximum rated conductor temperature of 75°C.  No test should ever be allowed to exceed that, and the uses for the transformer are such that it won't happen.

One thing I decided fairly quickly after using it a couple of times, was that a 'built-in' current monitor was essential.  I used a current transformer (AC-1005), which is rated for 5A.  By reducing the burden resistor to 10Ω, it is perfectly linear to 100A.  The current transformer provides 1mA/A (1:1,000 ratio), so (for example) 10A gives a voltage of 100mV with the 10Ω burden.  It's still easy to read down to 1A (10mV), but that's not a major requirement because 1A can be obtained from almost any transformer already.  The output at 100A is 1V RMS.  Most measurements will be in the range of 10A to 30A or so, providing a current transformer output of 100 to 300mV RMS.

The first thing you need to do with the transformer you intend using is to determine the turns ratio.  This is most easily done by winding on 10 turns of light gauge wire, apply power (and measure the mains voltage with a 'true' RMS meter), then measure the voltage across the 10 turns.  For example, if the mains is 230V and you measure 2.3V, the transformer has a turns ratio of 10:1 (primary to secondary).  As it transpires, 10 turns was ideal to get the voltage I wanted, indicating that the transformer is 2.5 turns/ volt.  Therefore, 10 turns provides 4V (open circuit). 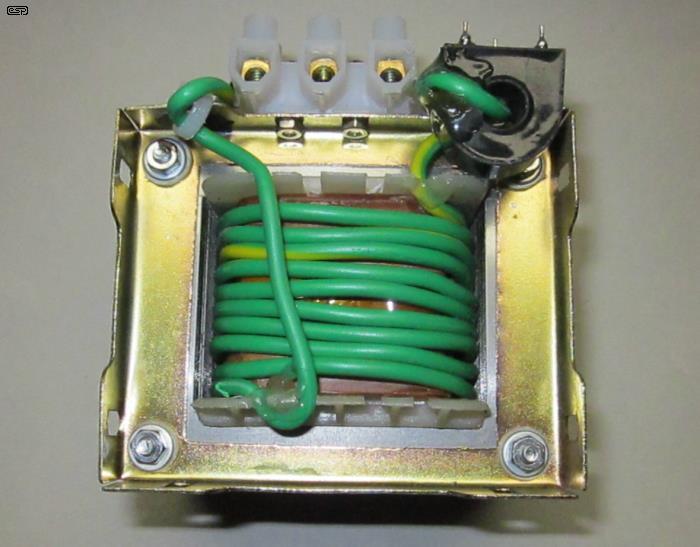 A photo of my units is shown above.  It's not pretty or in a fancy case and uses heavy-duty screw terminals for the output and an IEC mains socket for the input (not visible in the photo).  The current transformer is at the top right, and it has a pair of pins for connection of a voltmeter and/ or oscilloscope.  The transformer can provide 100A output (tested and verified), but the windings (and external cables) get very warm fairly quickly.  This isn't an issue, as it will only ever be expected to provide that much current for a short duration (typically around 10-30 seconds or less).  The transformer primary is seriously overloaded as well, at around 400VA, but as long as tests are kept brief this will not cause damage.  If operated at double the rated VA, the duty cycle is 50%, but it will almost always be well below that in normal use.  This assumes that any usage of a 4V, 100A transformer can be considered 'normal'.

Ideally, the secondary winding would have used insulated flat copper, about 40mm wide and around 0.1mm thick.  However, this would be very difficult to obtain and expensive, where the method I used was virtually free because I had everything needed in my workshop.  A 'multi-filar' winding would also work well, but trying to maneuver (say) ten strands of 1mm wire through the core window (ten times) would result in stripped enamel, many tangles and a lots of rude words.

It's hardly worthwhile including a schematic, but it does show how it goes together.  I didn't include a mains switch on my unit because they are provided on Australian power outlets (which I have on my 'primary' Variac), but if you don't have them on the outlet you'll need one in the active ('line') input as shown, so you can turn it on and off.  Normally I'd suggest that the current transformer is optional, but for the majority of uses (including testing fuses or circuit-breakers for an example) then it becomes essential.  Measuring most things at high current requires that you know how much current is being delivered, so I recommend its inclusion.

This is actually a good question.  Fortunately, I have a good answer.  As noted above, you can test fuses and circuit-breakers to find out their characteristics.  This isn't as frivolous as it might sound, because there are some things that you need to know that are difficult to test without a source of high current.  The article 'How to Apply Circuit Protective Devices' describes a barrage of tests performed on fuses and circuit breakers.  If you needed to do the same for high-current types, a normal bench supply won't provide enough current, and this project (or something similar) becomes essential.

My original goal was to measure the contact resistance of relays.  When you get down to 6mΩ or less, this isn't easy to measure without highly specialised and very expensive test equipment.  You can use the Project 168 low ohm meter, but that's limited to 1A (it could be boosted of course), which isn't enough current to fully test low resistance contacts at full rated current.  However, armed with a transformer than can deliver up to 100A, there aren't any relay (or switch) contacts that can't be measured.  In general, one would normally test contacts at their rated current, so for a 10A relay, you apply 10A and measure the voltage across the contacts - including the internal connections.  Contacts with 6mΩ contact resistance will show a voltage of 60mV RMS at 10A, which multimeters can measure easily.  Ideally, one would use a 'true RMS' meter so mains distortion doesn't affect the result.

Other examples include testing PCB tracks to verify that they can carry the expected current without vapourising, or getting so hot that they detach from the fibreglass substrate.  You can test wire temperatures at any current you choose, or determine the fusing current of any piece of wire that's significantly smaller than the winding size.  I have a selection of resistance wire, including NiChrome and Constantan (the latter has the advantage that it can be soldered).  I now have enough current available to easily determine the fusing current of either of these if I suddenly need to know.  I can also check very low resistances, with good resolution down to a few milliohms.  Because the output is 50/ 60Hz AC, it can't be used to measure the resistance of inductive components, and for that you must use DC.

One of the joys of electronics as a profession or a hobby is that you will always find ideas that are new, or at least new to you.  The requirement for very high current isn't something that you'll need often, but once you have the necessary test gear to produce it, it's almost inevitable that you'll find it to be useful.  These ideas may never have occurred to you before, often simply because you had no way to check, but there is often a need to test something that can't be done any other way.

It's up to the reader to decide if this is something they want or need.  I've found myself needing a source of very high current on a number of occasions, and invariably had to rig up something temporary to perform the tests I wanted to do.  Now I have a dedicated unit that does just what I need (and more - 100A was never needed in previous tests), and it may sit around for anything from a few weeks to a couple of years before I need it again.  The important thing is that it's now available.  Take it from its place on the shelf, plug it into the Variac, and the tests can be completed with the minimum of fuss, and with a method of monitoring the current (via the current transformer) that tells me exactly how much current is being delivered.

The accuracy of the current transformer has been checked, and it's within 2%.  I don't need anything better than that, and nor will most others who build one for themselves.  One of the great advantages of a separate transformer (vs. a Variac by itself) is that damage to the Variac is averted (high current at very low voltage will cause damage), and (most importantly) the output is isolated from the mains and safe to handle.  However, if you're running high current through small wires, there is definitely a risk of burns, melted insulation and other mayhem.  As with any piece of test equipment, you need to be aware of possible risks.