VU (Volume Unit) meters used to be the mainstay of audio metering systems, but they have been replaced by LED metering in a great many mixers and other applications.  Even in software, the most common level meter is made to look like an LED meter, although there are quite a few "analogue" software meters available as freeware.  The Peak Programme Meter (PPM) was originally developed by the BBC to overcome the shortcomings of the VU meter, which is notoriously bad at showing the peak signal level.  The VU meter is average reading, and the ballistics are important if an accurate reading is to be obtained.

Ideally, a VU meter is supposed to take 300ms to stabilise, and should show only minor overshoot.  Very few so-called VU meters come even close to the specification, and the little units on tape machines and sometimes provided on power amplifiers generally bear no resemblance to a real VU meter except that the meter dial is divided into the proper number of divisions, and has a red section from 0VU to +3VU.  Oh yes, it will also say 'VU' on the meter face as well.

PPMs are less common, although quite a few systems use LED arrays that are (more or less) PPMs.  Some show both VU and Peak Programme on the same LED array, with one LED seeming to 'stick' at a higher level indicating the peak.  A true PPM has a linear scale and uses a logarithmic amplifier to convert the linear change of input voltage into a log output to drive the meter.

See Project 128 for an alternative to the system shown here.  The later project relies on the meter's ballistics, but will be more than acceptable for most applications.  Naturally, the two can be combined, but there is no PCB available for the circuit shown below.

The unit described here makes no pretence at being a real VU meter, and although it can also be used as a PPM, it does not meet the original BBC standards, which call for a linear meter and a logarithmic amplifier, with highly specified ballistics.

PPM:  A standard PPM has a 5ms integration time, so that only peaks wide enough to be audible are displayed.  This translates into a response that is 1dB down from a steady state reading for a 10ms tone burst, 2dB down for a 5ms burst, and 4dB down for a 3 ms burst.  These requirements are satisfied by an attack time constant of 1.7ms.  The decay rate of 1.5 seconds to a -20dB level (IEC specified) is met using a 650 ms time constant.

VU:  A VU meter is designed to have a relatively slow response.  It is driven from a full-wave averaging circuit defined to reach 99% full-scale deflection in 300ms and overshoot not less than 1% and not more than 1.5%.  Since a VU meter is optimised for perceived loudness it is not a good indicator of peak (transient) performance.  Nominal sensitivity for 0VU is 1.228V RMS, and the impedance is 3.9k.

Although these specifications are available as shown above, the meter movement itself will rarely behave itself well enough to meet the specs without a direct-coupled amplifier to control the meter's mechanical components.  This would needlessly complicate the project, which needs to be able to indicate average and peak power or signal levels, but for the purposes of this exercise does not need the absolute accuracy of the real thing.  Since properly damped meters are rare and expensive, I have chosen to use a standard readily available meter movement.  This will be quite satisfactory for the intended purpose.

The amplifier / rectifier is a simple LM1458 or similar dual opamp, and buffers the rectifier circuit.  Active rectification is needed so the diode voltage drop does not cause huge inaccuracies, but by amplifying the signal first, we can use a simple rectifier and reduce the overall component count.  The diodes must be germanium types as specified, or the low levels will suffer significant deviation from the ideal.  Schottky diodes can be used if you can't get the germanium types (they are becoming hard to find) with a small loss of low-level accuracy.  This is not intended as a precision instrument, but will be much better than the units that are available (OK; most of the units that are available - if you really want to spend $400 or more for a single meter, then it will be better than this - but by how much?).

Figure 1 shows the typical internal circuit of simple (cheap) VU meters.  A single diode is used in some, but the better ones will generally use a tiny selenium bridge rectifier or a germanium diode bridge.  Although a capacitor is shown, few budget VU meters will include it.  As a result, the meter movement itself is uncontrolled in most of these meters, so overshoot is often huge, and the reading is almost useless.  Because of the diode forward voltage, many of these meters also fail completely to register low level signals (< -20 dB).  It will be seen that the first calibration mark on VU meters is at -20VU, and this accounts for the diode forward voltage drop.

In contrast, Figure 2 shows the meter's ballistic control for this project, which involves a low value resistor in parallel to damp the movement, and a capacitor to provide some additional damping and better averaging when in VU mode.

There are two different time constants.  One gives the averaging needed for VU metering and is present at all times.  The other is switched in by SW1, and the 100 ohm resistor (R5) ensures that the rectifier will charge the capacitor in 10ms, with a 1 second decay time.  This is used for PPM mode, and allows you to see at a glance what the peak level is.  The difference between VU and PPM readings can vary greatly, but will typically be between 10 and 15dB, depending on the signal source.

The rectifier circuit is as simple as I could make it, but will still have quite good performance.  The diode voltage drop of a germanium device is only about 200mV (as opposed to 650mV for a silicon diode), so the low level inaccuracy is minimised.  'Proper' full wave rectification could have been used with the standard opamp precision rectifier, but this would increase component count needlessly.  The circuit shown is a reasonable compromise.

The values of R6, C1, C2 and C3 may need to be adjusted, depending upon the ballistics of the meter movement you use.  Because meters vary so widely in this respect, it is only possible to provide representative values, although they should work quite well in practice.  In order to get exact VU meter ballistics, it will be necessary to test the meter with a 300ms burst waveform at full scale (+3VU).  It should reach 99% of full scale with up to 1% of overshoot before dropping back to zero.

By virtue of the design, a moving coil meter movement responds to the average value of applied current.  If the movement is seriously underdamped, the (moving) average will still cause excessive pointer activity - C3 is designed to help damp this.  Should you be fortunate enough to have a well damped meter movement, it may be possible to omit C3.

The circuit has 2 inputs shown.  The signal input has an impedance of 10k, and may be adjusted for full scale with a signal of about 500mV.  The speaker input is optional (just leave it out if it's not needed), and has a maximum sensitivity of 5V.  It can be adjusted to allow for any higher voltage to suit nearly all power amps.  If both inputs are not required, just leave the unwanted one out of the circuit.

The first opamp is an inverter (with gain control to allow calibration), and the second stage is also an inverting buffer with a gain of -1.  D1 therefore rectifies the negative half-cycles, and D2 rectifies the positive.  This gives full wave rectification so that both positive and negative peaks are measured.  This is important, because audio signals can be very asymmetrical, which causes significant error in the indicated level.  The lowest levels are unimportant in this application, so the diode induced inaccuracy is of no consequence, but for lowest error, use the suggested OA91 (or OA95, 1N60, 1N34A etc.) germanium diodes.  You can also try BAT43 Schottky diodes.  LM1458 dual opamps have been specified, and these will be more than adequate for this meter.  Better opamps may be used, but there will be little or no improvement in performance.

We must ensure that the capacitor can be charged quickly for use as a PPM using the opamp output current, which is typically only about 20mA, so a reasonably small capacitance is needed.  Even so, with the meter movement loading of about 3500 ohms, the decay time will be much too fast.  Increasing the capacitance will make it that much harder to charge the cap quickly enough, so Q1 acts as a buffer.  D3 and the associated resistor provide a forward bias so the transistor will be conducting at the first sign of any signal.  The negative terminal of the meter circuit is held at -0.65V, so the transistor already has the needed 0.65V emitter to base bias.  D1 and D2 will prevent the meter from registering any significant deflection with no AC signal present.  Any small amount that is visible can be corrected with the meter's mechanical offset adjustment. 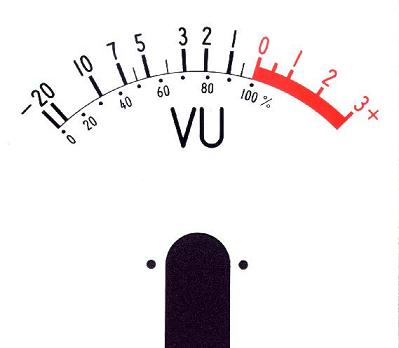 A sample meter scale is shown in Figure 3, and this can be used as a template, or you can re-size the image and print it onto suitable material and stick it to the meter face.  If you are really lucky, you might even be able to obtain a 50uA or 100uA meter movement already calibrated in VU, but don't count on it.

A 50uA or 100uA meter movement is about the ideal, and these are very common.  Like all analogue movements they are not cheap, and a unit of reasonable quality will be in the order of $20 or so.  These will typically have a DC resistance of about 3500 Ohms.  If the one you get is markedly different, you may need to adjust the 4.7k and 220 Ohm resistors (R7, R8 and R9) so that full scale is achieved in VU mode with an input of 5V into the speaker input.  The calibration control must be at maximum resistance for this test.

The output voltage from the rectifier for full scale is designed to be about 5V, and the 4k7 and 220 ohm resistors around the meter provide the attenuation needed and give excellent electrical damping.  The capacitor in parallel with the meter also helps to damp the movement, preventing (at least to some degree) overshoot and undershoot.  The exact value might need to be changed to suit the movement you have, since as noted above, their ballistics are somewhat variable.  This circuit is much faster than the standard 300ms (or 150ms as used by some manufacturers).  I happen to think that this is too slow to be useful, and I think that you will be happy with the final result.  C2 (47nF) is optional.  When this is in place the meter will show a slightly higher than normal reading for a given signal, and this will give a more meaningful VU reading in most cases.