Main Index
The devices described here must not be considered comprehensive, as I am sure that there are a great many additional counterfeit devices available that have either not been discovered yet, or whose purchasers are too embarrassed by being caught by the fraudsters, and are unwilling to admit that they were robbed.

I would like to thank those who have sent information, photos or links to other sites about fake devices.  Your continued vigilance will help the fight against these practices.  It is a fight that we cannot win, but at least by knowing what to look for and where the problems have been found, there is at least some hope that we can make it harder for the criminals involved.

Although I have concentrated on power transistors, and especially those used for audio power amplifiers, counterfeit semiconductors exist in nearly all categories.  ICs - especially those with relatively high value - are potential (if not real) targets, and even mundane passive parts have been faked.  Many polypropylene capacitors are in fact polyester, some 'non-inductive' resistors are just standard wirewound resistors re-marked, and even electrolytic capacitors have been faked (yes, that is completely true - I've seen one!).

In short, any component that is priced higher than another of similar shape and size is a possible target.  Over the years, I have had a bizarre variety of parts brought to my attention.  Most don't get published because there is not enough information or the claims made cannot be substantiated, but there is still good reason to be ever vigilant.

The following is a list of faked components identified with reasonable certainty so far.  As noted above, there will be many, many more - these are the ones that people have advised me they have found, and where there is sufficient evidence to be certain that the devices are in fact fakes.  You can be sure that any high priced component is a candidate for counterfeit fraud, just as the case with clothing, aircraft spares, DVD movies, etc., etc.

... and just in case you thought that this was a conspiracy affecting hobbyists, I suggest a web search - the cost is in $millions, and is spread world-wide! Almost anything that can be faked is being faked.  I'm sure everyone has received countless e-mails from spammers offering cheap watches, software, drugs, etc.  Almost without exception, the goods are of poor quality, and many may not work at all (prescription drugs are a particularly worrying problem - many have zero active ingredients, placing people's health and lives at risk).

So, off you go to the local parts shop to buy some transistors (or indeed, other parts!).  Having decided the devices that fit your needs (having selected any of a number of devices that are suitably rugged and powerful), you hand over a not insubstantial amount of cash and head home to build the masterpiece.  Inexplicably, the expensive output transistors fail, but you know that their ratings are well within the design limits for the project you are building.  This happens once, maybe twice, or perhaps more.  You get discouraged, and shelve the project - having already spent quite a lot on all the parts needed.

Even worse, during testing, the transistors are (or seem to be) fine, only to fail later taking your expensive speakers with them.  Now it is really serious.

The first instance (that I know of) was in 1980, when MJ15003/4 transistors were sold under the brand name 'TIC'.  These, and many similar counterfeits were in fact 2N3055 and MJ2955 aluminium cased devices, and the counterfeiters had removed the original markings and screen printed the fraudulent type numbers on the cases.  Why? Because 2N3055 and MJ2955 devices are cheap, and genuine MJ15003 and MJ15004 transistors are not.

All over the world, people buy power transistors with amplifier kits or by themselves (for example to assemble any of the ESP designs), and they fail.  One reader in New Zealand was caught with fake 2SA1302 & 2SC3281 devices, causing his P68 subwoofer amp to fail, and similar stories surface all the time.

Counterfeit transistors cost far more than their monetary value - loss of confidence, time, 'collateral damage', etc. are far worse.  I hear these stories typically about once or twice a week, and the only difference is that a new target for the counterfeiters has been found.

In most cases, I doubt that the supplier has deliberately supplied fake devices, but the fact remains that they have counterfeit stock and people have been affected.  All suppliers should, nay must be advised immediately if you discover counterfeit devices.  It is most unfortunate that so many suppliers have their heads buried so far in the sand (or see below

) that they will not believe their customers.  It may help to direct them to this page, but some are so far gone that they refuse to believe that counterfeiting even happens! 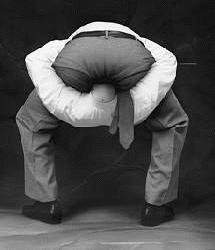 For every e-mail I get on this topic, there will be hundreds of other people who don't know about these pages, and who think that the mistake must have been theirs - this is a sad situation indeed!

The photos above are indicative of what you will find inside a couple of typical fakes.  The MJ15003 has two dies, each about 3 mm square, and simply wired in parallel.  As can be seen, there is no heat distribution "coin" - they are simply bonded to the steel case.  Motorola (or ON Semiconductor) has never made a power transistor in this way (to my knowledge, or that of anyone else I've spoken to about the fakes).

The situation with the 2SA/C devices is a little less obvious.  The silicon die is just visible under a layer of silicone (the emitter and base leads came away with the epoxy, which is why you don't see them).  The die is again 3mm square, and is bonded directly to the metal tab.  In this case, the tab is of copper, so that part is acceptable.  Unfortunately, I don't have an original device for comparison, so if anyone does (preferably a blown one - they are too expensive to sacrifice), I would appreciate a photo or even a description of the insides.

Not Everything Is A Fake !

Despite appearances, the device shown below is not a fake.  Normally, when one sees two dies in the same case it is good reason to be very suspicious.  However, there are a (very) few devices that are made like that on purpose. 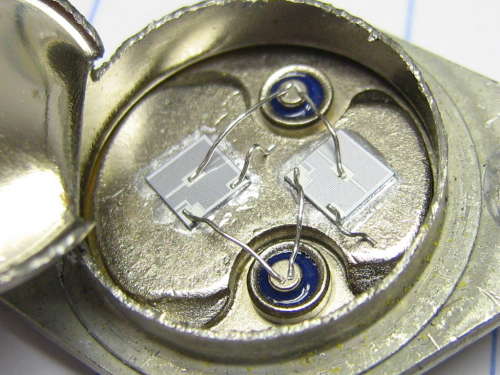 The transistor pictured is a dual MOSFET, branded Exicon and supplied by Profusion in the UK.  It is exactly what the Profusion website says it is ... a dual lateral MOSFET in a TO-3 case.  Being a MOSFET, wiring the dies in parallel is perfectly alright, and simply doubles the current and power rating of the device.

However, this trick does not work with BJTs, and to my knowledge there has never been a genuine dual-die bipolar power transistor made by anyone.  The above image was included here to demonstrate that one must not only be vigilant, but must also do some basic research before declaring any given part as counterfeit.  While a part may well be fake, it is the responsibility of the purchaser to ensure that the parts received are not up to standard before complaining.  It's far too easy to blame the part, when the real fault is a bad design or a mistake during assembly.

The only thing I can suggest is that you exercise extreme vigilance when purchasing semiconductors, and especially the premium devices.  If they are normally expensive, then they are ripe for counterfeiting, since the potential gains for the criminals behind these rackets are very large indeed.  Always beware if you see normally expensive devices being offered for sale much cheaper than normal.  This is usually a good indicator that something is wrong - and in such cases, the supplier may know full well that he is selling sub-standard parts.  This is a criminal act ('intent to defraud' or similar) in most countries, and should be reported to the police.

For many resellers, they are tempted by the low wholesale prices (and may not be aware that fakes even exist).  They see a way to maximise their own profits.  The backlash is that their customers will be bitterly disappointed, and will very likely take their custom elsewhere - a classic no-win situation.

Be more than careful with devices offered at auctions.  Not all will be fakes, but you can almost guarantee that a fair proportion are counterfeit.  I have had e-mails from a number of people who have purchased semiconductors at various on-line auctions, and the results were entirely predictable.  The devices bought were fakes, and there is little or no recourse with an on-line seller who can happily disappear after unloading the goods.

Even some of the more established sellers will (inadvertently or otherwise) offer counterfeit components.  Don't assume that semiconductors are the only parts that are affected - a great many polypropylene capacitors are nothing of the sort (they are polyester or Mylar), and virtually anything that can be made to look like a more expensive part will be.  Even though the individual gain may be small, if an unscrupulous dealer can make an extra ten cents on 10,000 parts, this represents a very worthwhile profit from their perspective.

Counterfeit components are not only those that are re-marked with a different manufacturer's logo and/or part number - no-one has been able to categorically deny that 'bad' batches of parts (where something went wrong in the manufacturing process) are destroyed.  The most likely situation is that they are auctioned off as scrap, except the scrap metal merchants may well see a golden opportunity to make a lot more than the would by melting the parts down for their metal content.

Does this actually happen? I honestly don't know, but I would be much more surprised if it does not occur than if it can be shown that it is normal practice (in some countries at least).

If you discover that you have been supplied with fake components, come clean and admit your mistake.  Otherwise, be willing to prove to your customers that you have never stocked counterfeit components.  Please! This is not a big thing to ask, and will go a long way to showing that you value your customers and their custom.  If not, you will be seen as the baddies, and rightfully so if you continue to defraud your customers!

All suppliers should be able (and willing) to provide the customer with an assurance that parts have been supplied by reputable wholesale outlets, preferably the manufacturer's appointed distributor.  This applies equally to independent distributors (brokers) who act for equipment manufacturers with 'distress' stock (i.e. stock that will not be used in production), and who supply devices from many different semiconductor suppliers.  I suspect that these brokers are one of the main problems, because they will rarely (if ever) be in a position to supply the necessary paperwork to prove the device's authenticity.

This does not mean that no-one should ever use their services, but all end users and retail/ wholesale suppliers must be vigilant to make sure that no fakes are substituted for the real thing.  No-one wants to be stuck with thousands of counterfeit components, so they tend to circulate world-wide until they all eventually blow up.  The cost of counterfeits to everyone involved is high, and the sooner everyone is aware of the problem, the better.

When discovered, fakes should always be destroyed.  This will help to prevent circulation, so that the overall impact is reduced.  Unfortunately, no-one wants to do that because destruction represents a complete financial loss.  Few suppliers are in a position (or will be willing) to suffer the loss - even if it was their own stupid fault for not checking the pedigree of the stock they purchase.