Decade (or 'substitution') boxes may seem 'old hat', but they are still an extraordinarily useful piece of kit for your workshop.  They are available from a variety of sources, but 'name-brand' versions are often very expensive.  Without anything more than a few cheap rotary switches and a handful of resistors and/ or capacitors, you can make one yourself.

An alternate method for resistors is to use a pot, but that means setting it to give the results you need, than disconnecting it so you can measure the resistance.  Pots also have very limited power handling, and an accidental twist can result in close to a short circuit and likely a destroyed pot as well.  A decade box lets you select a specific resistance (or capacitance) within the range of the unit you build.  In most cases you'll need five decades, with full-range resistances of 90Ω, 900Ω, 9kΩ, 90kΩ, and 900kΩ.  This allows you to set any resistance from 10Ω to 999.99kΩ in 10Ω steps.

You may elect to limit the number of switches and resistors by eliminating the lowest or highest range, but this is generally false economy.  Murphy's Law dictates that if you omit a range, you will find that you need it - usually within a week after construction has been completed.  Likewise, you might wish to add a range, depending on what you expect to be doing (but beware of Murphy's Law - if you add another range, it may never get used).

Capacitance decade boxes are (usually) more limited.  Having a low range of 100pF to 900pF is useful, and few projects need less.  Very low capacitance ranges are difficult, because stray capacitance can (and does) play havoc with the actual value.  Your switch may indicate 100pF, but it could easily be double that.  Having ranges of 100-900pF (optional), 1-9nF, 10-90nF and 100-900nF will normally be sufficient.  adding 1-9µF is useful, but isn't really necessary and is fairly expensive to include.

Some projects you may come across use BCD (binary coded decimal) switches, but it's a nuisance to provide the 1, 2, 4, 8 sequence used as they are not standard values.  BCD switches can't be used for resistance easily, but they do work with capacitance.  Decimal thumbwheel switches are still available, but are hard to find and expensive.  The thumbwheel switch option isn't covered here.

Of course, you can buy a decade box, but they are either fairly limited (too few decades) or too expensive (I've seen them advertised for well over AU$600).  The benefit of making your own is that you can decide how many decades you need, you can choose the resistor power ratings for each range (depending on your needs) and make it in a case of your choosing.

These will be in whatever units you choose, typically 1-8.2nF, 10-82nF and 100-820nF.  This allows standard 12-way switches to be used.  To increase the range, you can add a switch to connect the banks in parallel.

My choice here is a five decade box, giving a maximum of 1MΩ.  If you think you need to get to 10MΩ you can add the extra decade, but most of the time it will be unused.  Each decade uses nine resistors and one 10-position rotary switch.  The lowest decade (0-9Ω) is made somewhat more useful if you use 1W resistors, because there is more chance that they will be subjected to higher current than the others.  You can use 5W resistors for the first five resistors if you like, so the entire 0-9Ω range can handle 5W, but it's not ideal to do so because wirewound resistors have poor tolerance and are very bulky.

If you need a low-resistance, high-power decade box it would be better to make it as a separate unit.  Beware of switch resistance - this can easily make a high current version impractical. 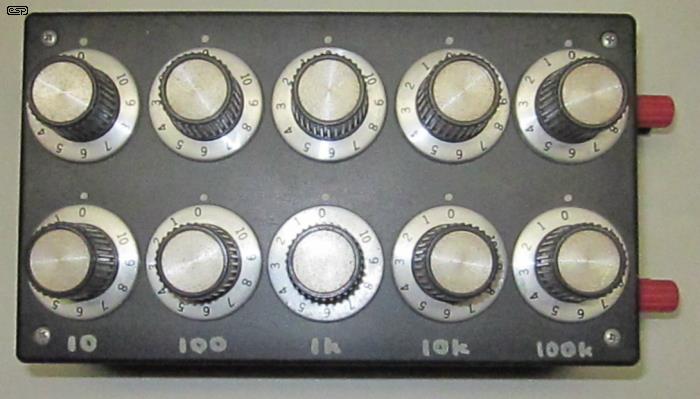 The unit shown above was built many years ago, and is a dual version (impossible to buy if that's what you need).  The ranges are from 10Ω up to 1,111,110Ω because the 0-10 knobs I used allowed me to add the extra resistor.  The low range goes from zero to 100Ω, and the others follow the same pattern.  When I built it, I decided to make it a dual version, as it's not uncommon that you need to select more than one resistance when experimenting.  Bear in mind that most switches will add some resistance, as will the internal wiring, and this means that the low range will have some 'residual' resistance even when it's set to zero.  In some circuits, the stray capacitance will also be an issue, especially with high resistances.

Expect to pay around AU$5.00 each for the rotary switches, and you may have to search to find numbered knobs that match the switch positions.  Most numbered knobs should match, but you need to verify that before buying them.  The circuitry is very simple - just an array of resistors soldered directly to the switches, with all resistors in series.

The circuit is just repetition, using banks of equal-value resistors in each section.  I've shown it using the same arrangement I used for mine, with eleven positions for each switch (0-10).  All resistors are in series, but selecting '0' for any bank shorts it out so it's not added to the total.  There will be some residual resistance due to the switches, but it will normally be low enough that it won't cause a problem.

This can't really be called a 'decade' box, because the capacitance changes in a logarithmic pattern (each value is increased by 10^(1/12) to obtain the sequence).  The schematic for a 3-bank substitution box is shown below.  It can be expanded, but higher values get rather expensive, and with lower values stray capacitance will become a problem.  The separate switches are used to select the required bank, and you can have one, two or three turned on.  With all three, the maximum capacitance is nominally 910.2nF, but that depends on the tolerance of the capacitors.

If you do work with high-voltage circuitry (such as valve amplifiers), the caps have to be rated for the maximum expected voltage.  Otherwise, I suggest that 100V is the minimum acceptable rated voltage.  This needs to be stated on the outside of the box too, otherwise you may forget and accidentally use higher voltage than the caps are rated for, probably causing their demise.  Note that there will be stray capacitance as well, but the actual value won't be known until you have it assembled.

With the range available, you should be able to get the value you need for most projects, but being a single unit it's not going to be very helpful where two or more capacitors have to be selected.  While still useful, capacitance boxes are far less common than resistance decade boxes.  It is possible to make a true decade box, but doing so requires capacitor values that have to be made up using paralleled (or series) capacitors.

The arrangement shown above is duplicated for each decade, but obviously starting with 10nF and 100nF for the next two.  It will take 20 capacitors to make each decade, and because of the greater volume the stray capacitance will be higher.  If you really want a capacitor decade box this is the easiest way to make it.  It's possible that you may be able to reduce the total by using caps in series, but they are a pain to work out and I doubt there would be any benefit.  I haven't bothered to work this out in depth, but 5nF is obtained with two 10nF caps in series, reducing the total to 19.  There don't appear to be any other series combinations that are useful.

While the decade version is more 'traditional', it's probably not quite as useful as the system using standard values.  Ultimately, if you decide on an optimum capacitor value that's not standard, you'll have to create it with parallel or series combinations anyway, but if you do find a standard value that works, it's shown directly on the substitution box.  There is quite a lot of lettering needed though, so making a panel will be harder than using numbered knobs.

There is no doubt whatsoever that capacitance decade boxes are expensive, either to make or to buy.  A substitution box using standard values is a better (or at least cheaper) option, because there are only 12 capacitors needed in each bank.  You need 18 capacitors to make each decade in a true decade box, but ultimately your final circuit will almost certainly end up using standard values anyway, so a substitution box is more practical in that respect.  However, it's harder to work out the final capacitance if you use two (or more) banks in parallel, requiring a bit of mental arithmetic.  With a substitution box, you can just read the values and use them in your circuit in parallel of course - assuming that you need an odd value.

Labelling a substitution box will be a chore, especially since you are using all 12 switch positions.  I leave this to the constructor, but a printed sheet (properly scaled) and laminated is one method that works fairly well and has good resistance to abrasion when the box is in use.

There is no doubt whatsoever that decade/ substitution boxes can be very useful, but most of the time the required values are simply calculated.  I don't recall how long it's been since I used mine (along with a couple of others I've accumulated over the years), but it's not very often that I can't work out the optimum resistance during the design process.  However, there are still valid uses for decade boxes, but they aren't as common as they used to be.

Including values less than 10Ω or 1nF is unlikely to be useful, because internal resistance and stray capacitance will affect anything less than that.  When you need capacitor values of less than 1nF, it's often for circuitry that's very sensitive to lead lengths (which add inductance as well), so attempting to use a decade box may cause circuit malfunction.  This applies to all substitution boxes, regardless of switch type.

These tools are useful, and are worth having if you do any experimentation.  They are particularly useful when setting up new circuits or for tests that are difficult (or impossible) using a simulator.  While the simulator is my tool of 'first choice', I've been using them for so long that I'm well used to their many foibles, and I know there are things that they will get wrong.  It's notable that circuits that don't involve magnetics (transformers & inductors) are rarely wrong, but you can still get caught!

There are no references, because the concepts are well known and available almost anywhere.  However, you will need to check the datasheets for the switches you plan on using, so that maximum voltage and current ratings are not exceeded.