PCBs are available for this project
Introduction

Firstly, I'd like to stress that the intended use of this circuit is only one of many possible applications.  Apart from the obvious usage as a headphone amplifier, the circuit can be used for a range of applications where a wide bandwidth low power amplifier is needed.  Some of the options include ...

In short, the amp can be used anywhere that you need an opamp with more output current than normally available.  Since most are rated for around ±20-50mA short circuit current (much less when driving a load), general purpose opamps are not suitable for driving very long cables or anywhere else that a relatively high output current is needed.

As a headphone amplifier, this design is very similar to others on the ESP site, but the main difference is that this one (and P70) has been built and fully tested.  The design is fairly standard, and every variation was checked out before arriving at the final circuit.  A photo of the board is shown below, and at only 76 x 42mm (3 x 1.6 inches) it is very small - naturally, the heatsink is not included in the dimensions.

The amplifier is capable of delivering around 1.5W into 8 ohm headphones, and 2.2W into 32 ohms - this is vastly more than will ever be needed in practice.  The use of a 120 Ohm output resistor is recommended, as this is supposed to be the standard source impedance for headphones.  Many users have found that their 'phones perform better when driven from a low impedance source.  The 'standard' is IEC 61938 (1996), but many modern headphones seem to be designed for far less than 120 ohm source impedance.  In some cases, the optimum source impedance is zero ohms (or very close to it), so don't use an output resistor if your 'phones need a low impedance drive. 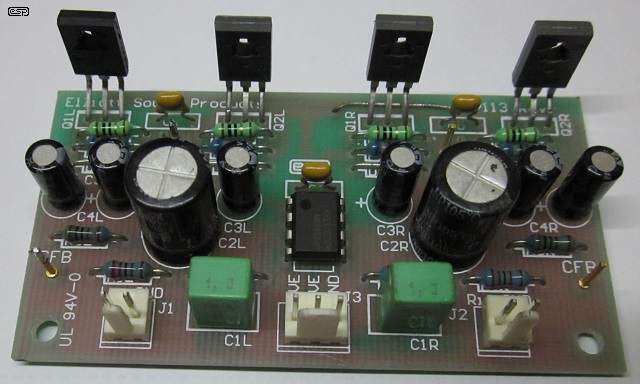 The circuit is based on an opamp, with its output current boosted by a pair of transistors.  Distortion is well below my measurement threshold at all levels below clipping into any impedance.  Noise is virtually non-existent - even with a compression driver held to my ear, I could barely hear any, and I couldn't hear any with headphones.  If the amp is used with reduced gain (4.3 (12.7dB) works well), the noise level is even lower.  This is achieved by using 3.3k for R4 (L+R) as shown in the schematic below.

Note the warning above - this is serious.  Most headphones are capable of at least 94dB SPL at 1 mW, with some as high as 107dB SPL.  Even 10mW is enough to create sound levels capable of causing hearing damage, so you must be very careful to avoid damaging levels.

Note that the exposure time is for any 24 hour period, and is halved for each 3dB SPL above 85dB.  The above shows the accepted standards for recommended permissible exposure time for continuous time weighted average noise, according to NIOSH (National Institute for Occupational Safety and Health) and CDC (Centres for Disease Control) [1].  Although these standards are US based, they apply pretty much equally in most countries - hearing loss does not respect national boundaries.

The amplifier itself is fairly conventional, and is very similar to another shown on this site (see Project 24).  This amplifier does not include the active volume control, because in general it is far easier to get a good log pot (or simply 'fake' the pot's law as described in Project 01).  Likewise, it does not include the cross-feed described in Project 109.  If this is desired, it is very easy to implement on a small piece of tag board, or even 'sky hook' the few components off the bypass switch.

The output transistors are biased using only resistors and diodes, rather than constant current sources.  Extensive testing showed that using current sources made no discernible difference to performance, but increased the complexity and PCB size.  Using separate caps for each biasing diode does make a difference though - and although it is relatively minor, the use of the two caps is justified (IMO).

The bias diodes should be 1N4148 or similar - power diodes are not recommended, as their forward voltage is too low.  This may result in distortion around the crossover region, where one transistor turns off and the other on.  As shown, crossover distortion is absolutely unmeasurable with the equipment I have available.

Above is the schematic of one channel.  Resistors and caps use the suffix 'R' for the right channel.  The second half of the dual opamp powers the right channel.  Note that the volume control shown is optional, and is not on the PCB.  If needed, it may be mounted in a convenient location and the output connected to the inputs of the board as shown.

One of the reasons the amp is so quiet is that the entire board runs from a regulated supply, so hum (in particular) is eliminated.  Although an unregulated supply can be used, this is not recommended.  The supply should be separate from that used for your preamp, because of the relatively high non-linear current drawn by the amplifier (at least with low impedance 'phones).  A P05 preamp supply can be used, and will ensure optimum performance.  The board can be operated from lower supply voltages than shown, but less than ±9V isn't recommended.  If a lower supply voltage is used, reduce the value of R5 and R6 (L & R), calculated to provide a current of not less than 2mA.

The prototype amplifier has flat frequency response from 10Hz to over 100kHz.  Distortion is below my measurement threshold with any level or load impedance, and output impedance is almost immeasurably low.  Your headphones may be designed to operate from a 120Ω source impedance (many are), so this may be added if it improves sound quality.  Adding any series resistance will reduce the available power, but it is already far greater than you can use.  Without series resistance, the minimum power into various load impedances is given below (based on ±15V supplies).

This may not include all headphones, but will cover the majority in common use.  In all cases, the available power is far more than needed ... not so you can damage your hearing, but to allow adequate headroom for transients and to ensure that the circuit operates within its most linear region.  In particular, look at the power output into all impedances with no limiting resistor.  The available power is more than sufficient to cause irreparable damage to your hearing and your headphones.

Feel free to increase the value of R7 and R8 (L&R) up to 22 ohms, as this will reduce the available output power.  It won't affect the output impedance, but reduces the current that can be drawn by the load.  Especially if you intend to use the P113 with no output resistor, it will be beneficial to reduce the gain.  The minimum I'd recommend is around 12.7dB (a voltage gain of 4.3), and this requires that R4L and R4R are reduced to 3.3k.

A pair of 32 ohm headphones that I tried was quite loud enough, with an average output voltage of 60mV RMS, amounting to a power of 112µW (about 90dB SPL).  I could hear no noise when the signal was disconnected, even though the P113 board was just sitting on my workbench with no shielding of any kind.

As noted, PCBs are available for this project, and this is the recommended way to make the amplifier.  While it may be possible to build it using Veroboard or similar, there is a high risk that it will oscillate because of the very wide bandwidth of the amplifier.  A capacitor may be added in parallel with R4 (L and R) to reduce the bandwidth if stability problems are encountered.  Although I used an NE5532 opamp for the prototype, the circuit will also work with a TL072, but at reduced power.  You may also substitute an OPA2134 or LM4562 or your favourite device, taking note of the following ...

Construction is fairly critical.  Because of the fairly wide bandwidth of the NE5532 and many other high grade audio opamps, the amplifier may oscillate (the original (Veroboard) prototype initially had an oscillation at almost 500kHz), so care is needed to ensure there is adequate separation between inputs and outputs.  Even a small capacitive coupling between the two may be enough to cause problems.

As already mentioned, this amplifier needs a heatsink.  While it can operate without one at low power using high impedance headphones, you need to plan for all possibilities (after all, you may purchase low impedance 'phones sometime in the future).  The heatsink does not need to be massive, and a piece of 2-3mm aluminium angle will be fine for normal listening levels.  An aluminium bracket may be used to attach to the chassis - I recommend 3mm material.  Note that the heatsink should always be earthed (grounded).

The output transistors must be insulated from the heatsink.  Sil-Pads™ are quite suitable because of the relatively low dissipation, but greased mica or Kapton can be used if you prefer.  If you use 3mm aluminium, you can drill and tap threads into the heatsink, so there is no need for nuts.  The BD139/140 transistors don't need an insulating bush for the screw, because they have an isolated mounting hole.

One addition that you may wish to make is to add a Zobel network to each output.  This isn't necessary (many hundreds have been built, and no-one has reported oscillation), but it also does no harm.  The standard Zobel using 10 ohms and 100nF in series is perfectly alright, and can be wired directly to the stereo headphone socket.  You can also have a switch to change the output impedance if you wish - some headphones may respond and/or sound better with series resistance.  The output impedance is introduced simply by adding resistance in series with the output of the amplifier.

Connect to a suitable power supply - remember that the supply earth (ground) must be connected! When powering up for the first time, use 56 ohm 'safety' resistors in series with each supply to limit the current in case you have made a mistake in the wiring.  These will reduce the supply voltage considerably because of the bias current of the output transistors.  These safety resistors aren't essential if you have a dual bench supply with current limiting (and metering) that can limit the maximum current to around 50-100mA, and show you the current.

If the voltage at the amplifier supply pins is greater than ±6V and the output voltage is close to zero, then the amplifier is probably working fine.  If you have an oscilloscope, check for oscillation at the outputs ... at all volume control settings.  Do this without connecting your headphones - if the amp oscillates, it may damage them.

Once you are sure that all is well, you may remove the safety resistors and permanently wire the amplifier into your chassis.